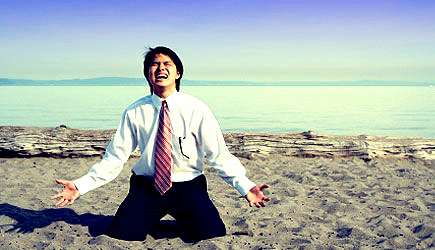 Recently, I wrote about the lack of preparation. This week, I am taking that topic one step further: detachment!

But, what made this mediation so bizarre was the total detachment of the dealer and its counsel from the whole process. Although the mediation was scheduled to start at 10:00 am, counsel for the dealer did not show up until more than ninety minutes later. (The dealer attended by telephone.) She then sat with the manufacturer’s counsel for a long while who filled her in on the case and the progress of the negotiations. After some time, the manufacturer’s counsel came out of the conference room to speak with me, advising that the dealer’s counsel wanted me to speak with her and provide an evaluation of why I believed her client had some liability. Alarm bells went off in my head: Standard 1 of the Model Standards of Conduct for Mediators is labelled “Self -Determination” meaning that the parties are to make their own determinations about the matter. Every mediation training I have attended has always emphasized that mediators should not evaluate; we are to be neutral and impartial (Standard II). And now, suddenly, this counsel who has just walked in and whom I have not really met, wants me to evaluate his client’s case! Oy!

As luck would have it, I happened to have someone observing the mediation and so I suggested that she, as a total stranger to the matter, like a juror, provide her view on the matter as it has unfolded during the mediation.

While the dealer’s attorney was polite and listened to her, counsel appeared not to give much credence to the impressions being offered by the observer. She still asked me for my opinion which I hesitated to give.  I really did not want to sway the outcome of the settlement.

Shortly thereafter, I spoke with manufacturer’s counsel separately who explained to me that although she took the deposition of the plaintiff, dealer’s counsel did not attend and, as in all the other cases in which the dealer has been named as a defendant along with the manufacturer, was simply taking a back seat and not paying much attention. This is so, even though the complaint alleged certain actions/omissions against the dealer separate and apart from the manufacturer. Consequently, dealer’s counsel knew very little about the case and was wholly unprepared to mediate. Further, she seemed quite detached from the whole matter and having no clue as to what was going on.

From then on, I made it a point to speak to the manufacturer’s counsel outside the presence of the dealer’s counsel; she had a relationship with the dealer’s counsel and was intent on resolving the matter with a monetary contribution from the dealer. She made it clear that she was going to “put the squeeze” on the dealer and maneuver it to contribute to a settlement.

So- for the next few hours, most of my discussion was with the manufacturer’s counsel who then spent considerable time speaking with the dealer’s counsel alone. Meanwhile, plaintiff and counsel sat in the other conference room twiddling their respective thumbs for hours. I did speak with them periodically, being very candid about why this mediation was not progressing or going smoothly. I was quite worried that at any given point, they would simply get up and walk out in frustration because this mediation was seemingly a waste of time and going nowhere fast. I am amazed that they did not leave!

After more than nine hours, the matter finally settled, thanks to the cajoling of the manufacturer’s counsel. Had the dealer’s counsel been on time and prepared, this mediation should have taken no more than four hours at most.

So, I guess the moral is that a lack of preparation and involvement will translate into a loss of time and money if not also unnecessary emotional stress and anxiety. Being prepared, involved and on time are valuable attributes!

….Just something to think about.

Posturing in Mediation
Substantiating the Claim: Establishing the Effectiveness of a Post-Conflict Directory
Don’t Go There: Threats Won’t Get the Deal Done

Phyllis Pollack
Phyllis G. Pollack is a full time neutral in Los Angeles where, as President of PGP Mediation, she focuses on business, real estate, contract and “lemon law” disputes. She may be reached at Phone: 213-630-8810 / [email protected] / Website: www.pgpmediation.com
This website uses cookies to improve your experience. We'll assume you're ok with this, but you can opt-out if you wish. Cookie settingsACCEPT
Privacy & Cookies Policy