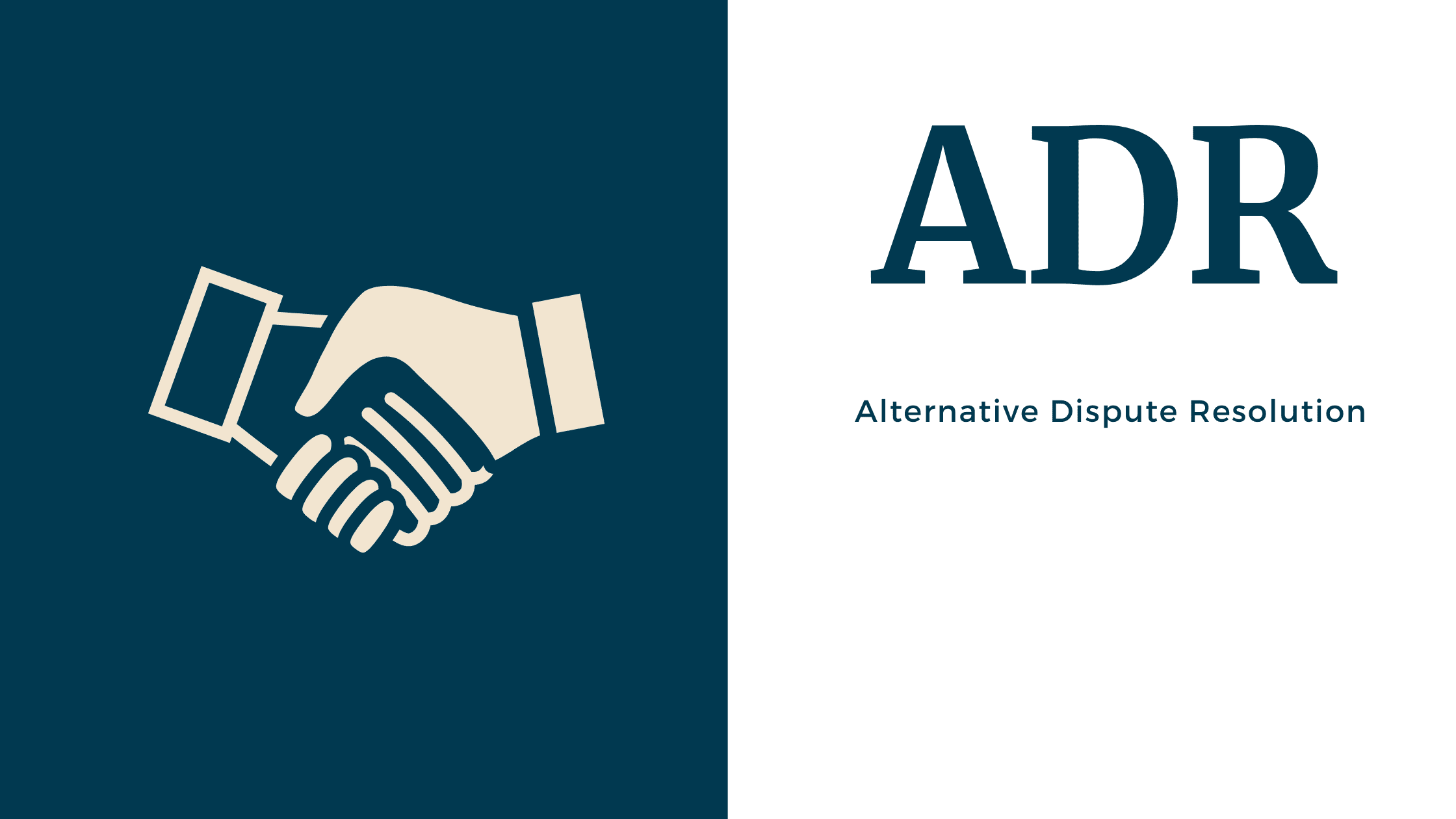 Alternative dispute resolution (ADR) is a blanket term used to speak to a series of defined processes that conflicting parties can use as an alternative to traditional litigation. The principle is comprised of two traditional methods for settling disputes that opposing parties may opt for when an agreement is being sought. The first is mediation, while the second is arbitration.

Mediation relies on a neutral third party to facilitate the dispute resolution process. While the mediator does not enforce any hard and fast rules, the person serves an essential role in helping the opposing parties agree to a settlement without litigation.

ADR that relies on arbitration also requires a neutral third party to facilitate the process. However, mediation and arbitration differ in more than the names. The arbitrator is also present to facilitate a decision, but it’s not in the same amicable manner that a mediator would. The final decision is taken by the arbitrator as the successful resolution of the dispute does not depend on the cooperation of the opposing parties in an arbitration context.

Features of Mediation and Arbitration as ADR Methods

Though alternative dispute resolution may take the form of mediation or arbitration, there are defining characteristics that you can use to contrast and identify the different types.

Mediation as an ADR Method

Mediation, while being the more flexible dispute resolution method, aims to use a structured negotiation style to help the parties involved resolve a dispute by choosing to agree on a mutually beneficial way forward. The mediator’s role is one of balance, which is why a neutral third party must be selected.

The structure present is usually informal. A few rules are made to maintain the desired case flow, but there aren’t many binding principles that guide how solutions are discovered. The control of these discussions rests solely within the hand of the parties going through the negotiation process. The free-flowing nature of the proceeding does not make it more non-binding.

Parties must still take the time to schedule a hearing in advance, but they have a more generous time window to do so than they would with a traditional trial. They need only to have things set up a few weeks ahead of the designated hearing date.

Costs are usually not very exorbitant, but business disputes may sometimes attract higher charges. No rules of evidence are present, and parties can enjoy full privacy.

Tension is a non-issue with mediation as it fosters a cooperative effort to reach a binding decision. A negotiation style of compromise tends to result, and the parties become more likely to communicate. When a contract or settlement agreement is reached to settle the dispute, it is generally honored by each party. However, there are cases in which one of the parties may decide to file an appeal in a court of law.

The focus of mediation-based settlements tends to be centered around future events.

Arbitration as an ADR Method

The parties agree on a set of binding arbitration rules before the hearing begins. The need for each party to be heard and actively participate in the binding decision at the end is no longer a factor in the resolution process. Therefore, the control of the proceeding rests within the arbitrator’s hands, which means the need for traditional negotiation is removed. Note that an attorney sometimes controls arbitration proceedings.

Parties who intend to get help from arbitration for their issues must schedule the hearing a few months before the proceeding is to take place. While there isn’t as much time flexibility as there is with mediation, arbitration still manages to be a better option than litigation. Traditional hearings for similar matters often require two years or more for scheduling.

Costs sit at the mid-range for arbitration proceedings. The cost is greater than that of mediation but is less than that of litigation. While arbitration usually guarantees that parties can settle their issues privately, there are incidents where proceedings don’t end in that manner.

Since the arbitrator controls the conversation and makes the eventual binding decision, parties using arbitration usually have an antagonistic relationship. Each party may not necessarily see the case from the perspective of the arbitrator, which means the potential of a feeling of unfairness is great. Therefore, parties are less likely to agree with an arbitration decision and often display resistance.

Those who use arbitration are more likely to appeal the result of disputes that went through the arbitration process in a court of law.

Arbitration tends to be used to handle past incidents. 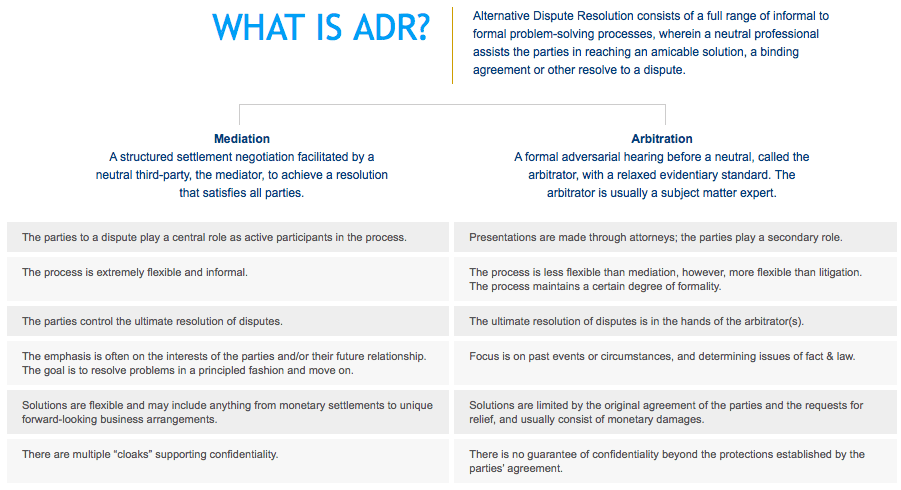 The History of Alternative Dispute Resolution (ADR) in the USA

Alternative dispute resolution was not always a formal construct in the United States. However, during the early British and Dutch colonial times in New York, arbitration was present in several commercial applications. This was a result of the beliefs of pilgrim colonists where the law was concerned. Though there was an established law system, the said colonists were not in support of using it.

To them, lawyers represented a threat to Christian harmony. Therefore, they avoided the use of the court system and relied on their own mediation process whenever community conflicts arose that may have required legal intervention.

Such trial-necessitating issues occurred often enough for a system to help deal with them to have been established. Instead of legal counsel and a judge, a body of male members was used. Of course, women didn’t have the status they would eventually attain yet, so not even one of them sat on this committee.

These men acted as a single third party and listened to different types of disputes that required solutions. The way they operated was more akin to an arbitrator than it was to a mediator. They had full decision-making autonomy with all cases they heard. Therefore, though the conflicting parties may not have agreed with every arbitration clause or requirement, there was no choice in the matter.

It wasn’t a non-binding context, which meant that there were many disputes without amicable endings. Informal arbitration was the norm in the colonial period and held up in the same bane as the law.

Independence would eventually occur, which led to the creation of a new federal governing body, which had binding jurisdiction over different types of legal matters where impartial decision-making was a requirement.

The federal government would use alternative dispute resolution in a series of different applications. The Patent Act of 1970 is one of the earliest examples. Disagreeing parties could resolve issues surrounding patent claims while not needing the help of lawyers. Instead, an adjunctive board was formed.

For the sake of situational familiarity and balancing the interests of each patent applicant, each patent applicant appointed one member of this board which would guide the case to resolution. Alternative dispute resolution was not only present here, but it was also legally binding as well. The board also comprised of a single member appointed by the secretary of state.

Since the proceedings did not have a non-binding nature, it meant any party opting out of the arbitration guaranteed that the other would have the patent summarily approved.

Alternative dispute resolution would not be formally instituted until the late 19th century. At this time, there were federal initiatives that allowed for mediation using bodies, such as the Federal Mediation and Conciliation Service (FMCS) or the Board of Mediation to foster certain negotiations.

In this state, alternative dispute resolution was not seen as a true litigation alternative. Instead, it was meant as a tool to foster agreement and avoid the economic disruption synonymous with strikes or unrest.

Choosing to forego the help of the legal system of court and using ADR for dispute resolution is advantageous for various reasons. These are as follows: