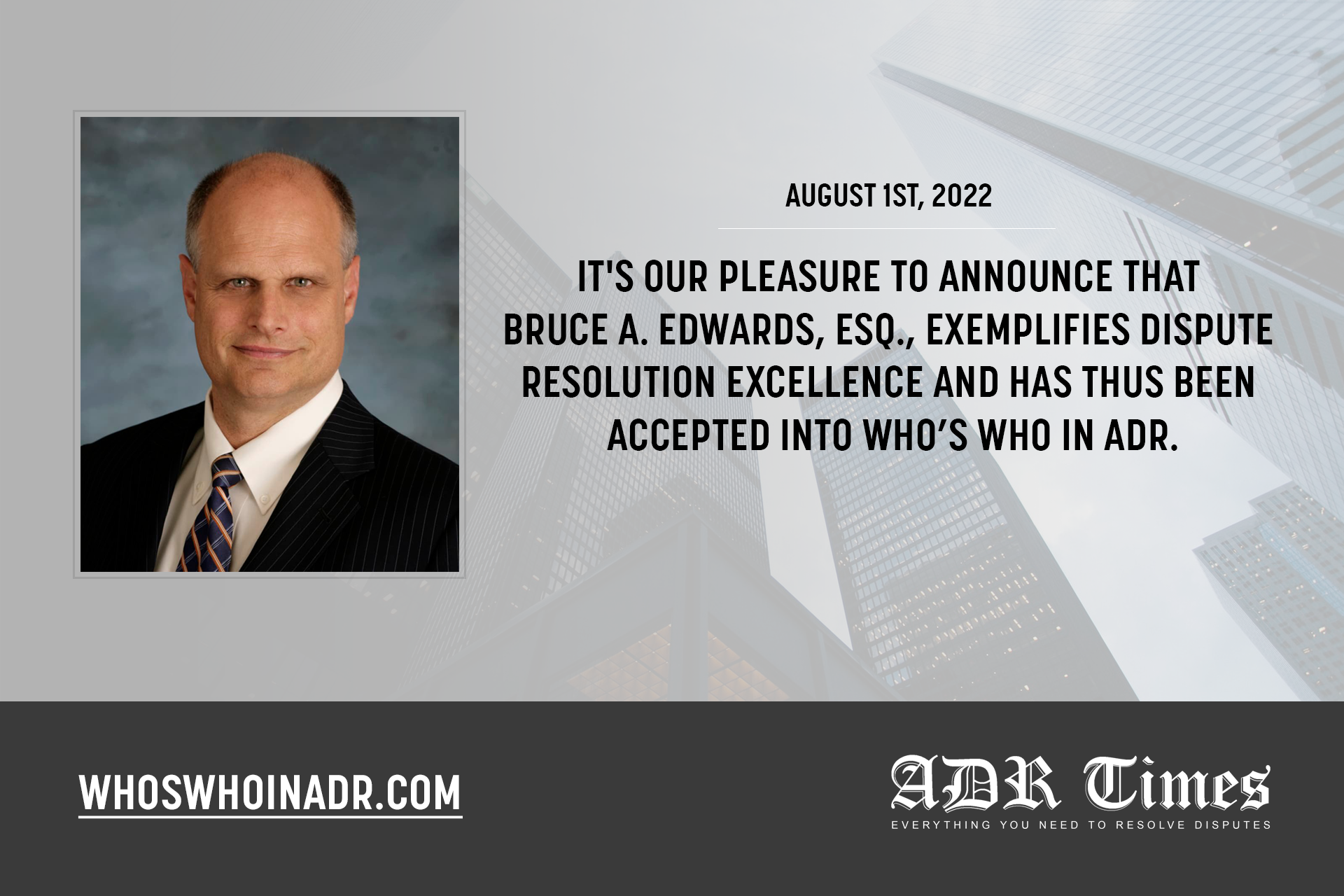 Irvine, California — Bruce A. Edwards, Esq., JAMS Mediator, Arbitrator, and Special Master, and Co-Founder of Edwards Mediation Academy has been accepted into the inaugural edition of “Who’s Who in ADR” by ADR Times – the foremost dispute resolution community for successful mediators and arbitrators worldwide.

Mr. Edwards was vetted and selected by a review committee based on the depth and diversity of his experience. Criteria for acceptance include independent research of a neutral’s track record of successfully resolving commercial disputes, thought leadership profile, peer nominations, as well as personal and professional achievements and honors.

“We are honored to formally recognize Mr. Edwards’ dispute resolution expertise and achievements,” said Mark Fotohabadi, publisher of ADR Times, the collective that includes Who’s Who in ADR. “Our mission with Who’s Who in ADR is to profile exemplary neutrals and dispute resolution executives who have proven to be a leader in their unique niche(s), and continue to inspire the next generation of problem solvers.”

As an inductee of Who’s Who in ADR, Mr. Edwards will be featured in our ongoing thought leadership promotional series, have exclusive access to our growing community, and have the opportunity to nominate other peers for review. Mr. Edwards will also be invited to work closely with our professional editorial team to continue to share his expert practice insights on positively shaping the future of dispute resolution.

Recognizing the need for premium dispute resolution content, connections, and community, ADR Times is the brainchild of co-founders, Mark Fotohabadi, Ph.D., and award-winning peacemaker and gifted teacher, the late W. Timothy Pownall (1948-2016), who together envisioned and built a parties-first approach to offer people and professionals entangled in conflict, direct access to dispute resolution excellence.

“It’s a sincere privilege to be accepted in the inaugural edition of ‘Who’s Who in ADR by ADR Times as they continue their efforts to instill a valuable sense of community in our still nascent profession. Both Mark Fotohabadi and the late Timothy Pownall have created a platform that will capture the best lessons of our past while providing inspiration for the next generation of mediators and thought leaders. I had the distinct pleasure of teaching with Mr. Pownall at the Straus Institute at Pepperdine University and can only imagine how proud he would be of ADR Times’ success. I know I will embrace this relationship with ADR Times going forward as we collaborate on ways to elevate mediation and arbitration in our country,” said Bruce A. Edwards, Esq.

We invite you to learn more about Mr Edwards: https://www.adrtimes.com/whos-who-in-adr-bruce-edwards-esq/