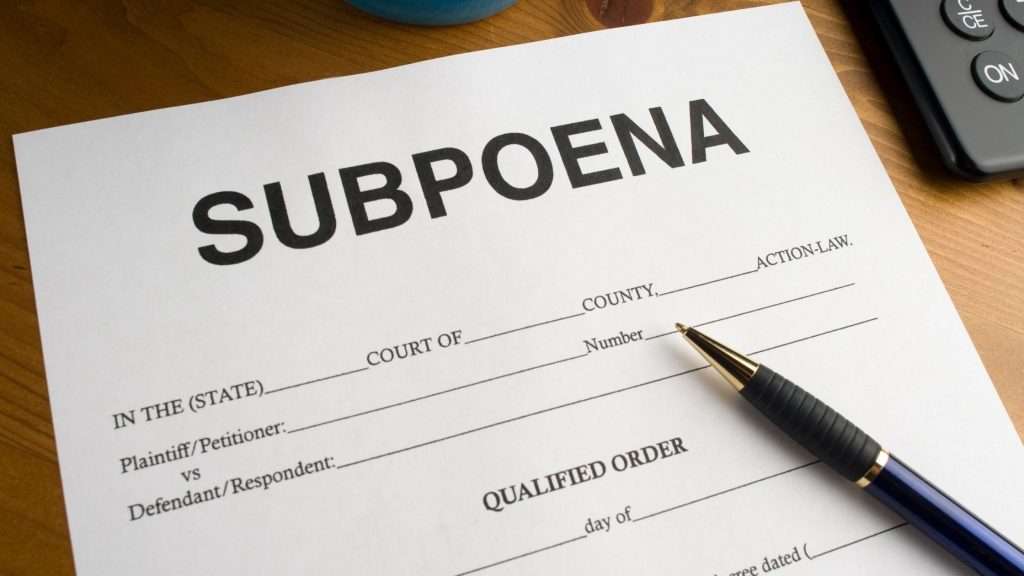 Finding a Way Out of a Subpoena?

After receiving a subpoena, the first thing many people wonder is what valid reasons they could use to get out of a subpoena.  Being served with a subpoena can be an intimidating process if someone has not encountered it before, and not following the directions correctly can result in severe penalties.

Subpoenas are serious documents that require the recipient to provide information on a case in some way, and they can be a hassle to deal with in certain situations, yet the cost of not complying with the request can sometimes make avoiding a subpoena not worth it.

The Purpose of a Subpoena:

A subpoena is a court order to provide information to the court either by testimony or documents.  The word subpoena is a Latin word that translates to under penalty.  This means that the person receiving a subpoena must provide the information to the court or face a penalty.  While this may seem harsh, it provides a vehicle for parties to require witnesses to testify and produce documents on their behalf when they have information that is vital to the case.  They are particularly common in criminal cases where witnesses may be more reluctant; however, many civil cases will utilize the subpoena for documents that are needed that someone other than one of the parties has.  Subpoenas allow the court and the jury to hear the most complete evidence necessary for the case to be decided.  Finding a way to present all the evidence allows the parties to feel confident in the outcome of their case.

There are reasons that parties may want to avoid complying with a subpoena for either type, but people are typically more reluctant to comply with a request to testify, simply because testifying at a trial can often feel overwhelming.  As we will discuss later, there are considerations when thinking about trying to avoid a subpoena that may affect the party’s interests.

Ways to Avoid the Subpoena:

The most important thing to remember when attempting to avoid a subpoena is that it cannot be ignored.  Choosing to ignore a subpoena will likely subject the recipient to contempt of court, which will often result in fines and potential jail time.  Because of this, it is important to communicate with either the party issuing the subpoena or an attorney when considering attempting to have the subpoena quashed.  An attorney can analyze the situation and the unique facts that apply to determine if there is a valid excuse for quashing the subpoena.  That being said, there are several reasons that a party could claim to avoid testifying or providing documents, including:

This is a list of the most common reasons a subpoena may be quashed or limited, and every jurisdiction may have some sort of variation on these.  There are also instances where there are several of these issues rolled into one subpoena, so those will need to be addressed as well.  The important thing to note is that in most cases, a lawyer will need to be hired and a motion to quash the subpoena will likely need to be held.  People cannot just ignore subpoenas.

The Risks of Avoiding Subpoenas:

Choosing to try and avoid a subpoena is not an easy process.  The person will need to hire an attorney, pay attorney fees in most cases, and will need to prepare a motion.  If the motion fails, or if there are other reasons that a party may need the person to testify, they may not be excused.  This can mean that all the work that the person put into fighting the subpoena was not worth it.  Additionally, if a party chooses to ignore a subpoena, they can be subject to contempt of court, which can bring serious penalties.  Therefore, it is important to consider the reasons that the person is resistant to the subpoena.  If they only want to get out of duty because it makes them uncomfortable, it may be worth considering other techniques to help make it easier for them.  If there is a legitimate issue with the subpoena or the testimony or documents are not needed, it may be worth fighting the subpoena, especially if there is a combination of reasons to quash a subpoena.  While subpoenas may be a hassle, there are instances where complying with the subpoena may be the answer to the question of how to make it easiest for the recipient. We hope this article helped you look deeper into valid reasons to get out of a subpoena.