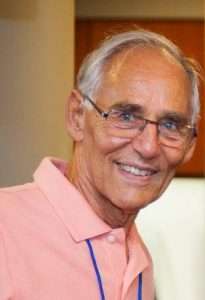 Part of an author’s job is to find just the right words to communicate an idea, an experience or an image to the reader. Not just accurately, but richly, in a way that promotes the fullest understanding of the topic without letting the words get in the way.

That makes mine a difficult task, especially now, when superlatives are out of fashion and Princes of Royal blood want to be treated like just plain folks. Dr. Cloke holds a B.A., a Ph.D, a law degree, and an LL.M. He is or has been a lawyer, a professor of law, history, mediation, urban planning, political science, conflict theory and other social sciences, an administrative law judge, a factfinder, a mediator, an author or co-author of at least twenty books and numerous articles on conflict resolution and mediation, a conflict resolution systems designer, speaker, blogger, consultant and trainer.

He is the co-founder and first president of Mediators Beyond Borders and Director of the Center for Dispute Resolution. In addition to addressing marital, divorce, and family disputes, school conflicts, organizational and workplace problems, Cloke is known for resolving complex multi-party disputes in strife-torn areas of the world.

To Dr. Cloke, being an effective mediator doesn’t mean having the right answers. It means asking the right questions. Questions drive the parties to show their inner selves, their desires, hopes, and fears honestly, so that conflicts don’t just cease. They are resolved.

He frankly admits that this is not an easy process. He goes about it with the brutal empathy of a doctor who says apologetically “This is going to hurt a bit” before she breaks your leg to properly reset it.  His writings talk about ripping and opening old wounds to reach the causes of conflict.

Conflict brings pain, and to protect ourselves we withdraw from what we need most — honest dialogue about the conflict and what we really want for our families, our organizations, our communities, our countries and ourselves.  This dialogue is going to touch us in some very tender places, but we can’t free ourselves if we “leave well enough alone.” Dormant conflicts resurface and critical problems aren’t solved.

The danger is not always limited to the disputants. In Part One of Mediating Dangerously, Cloke tells mediators that to help others they must first know themselves, and be aware of their own inner conflicts. These will sometimes help in understanding the fears, needs and motivations of the people involved.  Exploring our inner conflicts and ourselves may bring us nearer than we like to our painful places. But if we do not know ourselves, and ask ourselves “What would I do, how would I feel, what did I do when something similar happened to me?,” we cannot help. We must therefore be ready to risk reawakening old conflicts; and be ready to hurt alongside those we help. Our empathy will help us find just the right way to help them turn the corner. Because, though we are different, we are also much the same. And if the mediator hurts too? That’s just part of the process. Resolving conflicts requires courage.

All this talk about empathy doesn’t fit well with cherished ideals of mediator neutrality. But Cloke says neutrality is a myth. We can’t help but be influenced by our experiences, our beliefs, our past conflicts and our old, perhaps unhealed wounds. But it is those things that give us the empathy, insight and vulnerability we need to be effective. I don’t mean to suggest that Ken Cloke will take anybody’s side in a dispute. He takes everybody’s side.

Despite a career that would fill three or four ordinary resumes, Cloke continues to practice, teach, write and think about conflict resolution forty-plus years after he started. Why push so hard, demanding so much of himself and others?

Because, he says, we must. We face challenges that only those trained in mediation and promoting dialogue can meet. Our politics are deeply polarized, our people so dissatisfied they are turning to insurrection. The integrity of our electoral process is at risk. Climate change threatens our planet, but we have not found a way forward. We who have some skill in mediation have the ability, Cloke says, to use the skills we use to resolve small problems daily to the big problems we face. Cloke all but demands that we do so. But we don’t have much time. The need is urgent.

So, back to my problem as an author: How to describe such a multi- faceted person? Icon has been used and is wrong anyway. Cloke is more than an admired symbol of conflict resolution. He’s out there doing and creating. Pioneer has been used. Wrong. He didn’t start mediation. He has just made it his passion for a long time. How about polymath? But “learned in many subjects” sounds like studying. Luminary was used. No. It’s accurate but incomplete. He isn’t just an expert who influences others. He wants to get you to act, to move, to make a difference. The emphasis on pain and courage, and his urgency, made me consider “drill sergeant,” which I’ll use as soon as I find one stressing empathy and vulnerability. Guru? There’s a flavor of spirituality to his writing, with references to Hindu saints, Taoist and Buddhist concepts.  But guru refers to an expert, which we’ve already rejected.

How about “evangelist,” a zealot or bringer of good news? Ken Cloke is a true believer. He’s here to spread the word.  Anyone can mediate, he says. Anything can be mediated- war, terrorism, famine, climate change, poverty, political polarization, date rape, you name it. And there’s more good news. If you’re stuck, it’s only because you haven’t quite developed the necessary skills. Just keep going, he says. Yes, evangelist is the right word. The image it creates is of someone active, passionate, urgent, fully immersed in the subject, wanting you to join him in telling everyone. Someone with influence and admirers, who can’t wait to share what he’s discovered and change the world.

What made you want to become a mediator?

There were three big reasons.  First, I was working as a judge and felt dissatisfied.  I knew I was supposed to “do justice,” but had no idea how to get there.  Then I was assigned to conduct settlement conferences and found I was good at it, and it felt a lot more like justice because it was less formal, more open and win/win.  The second was my divorce and painful realization that there had to be a better way.  The third came from my experiences during the 1960s supporting equality, free speech, justice, and peace, and the realization that mediation as a process organically includes and encourages, on a small scale, each of these values.

How hard was it to transition to mediation full time?

I was among the first mediators trained in LA by the Neighborhood Justice Center, and at the time there were less than a handful of independent mediators in LA. I soon decided to join them and become an independent mediator, and it took about three years of passionate, dedicated work to make the transition, with lots of outreach, speeches, cold calls, and a steep learning curve (which I now know never ends) before I was able to become self-supporting.

What is your mediation style?

Holistic, eclectic, pluralistic, and responsive to whatever is happening at that moment in the conflict.  Every style works in some situations, but no style works everywhere, always, or with everyone, so we need to be skillful in every style.  Having said that, I would say that I am always on the lookout for heart openings and opportunities for transformation and transcendence.

What does a mediation typically look like when you mediating?

There is no such thing as a typical mediation.  “Typical,” to me, indicates the presence of a pattern shaped by some hidden, underlying, yet-to-be-discovered meaning.

What was your first mediation about?

A neighbor-to-neighbor dispute with lots of retaliation and counter-retaliation — until I naively suggested a solution they both liked and the conflict suddenly vanished in a flash.  I was hooked.

What is your biggest accomplishment professionally?

Having had the privilege of being able to do this work, experiencing its magic and heartfelt wisdom, and every so often, discovering that I can capture a bit of its depth and beauty in writing.

What are you most proud of outside of work?

My family and friends and curiosity about the world.

What are things that you like to do for fun?

Read, write, be with family, swim, walk, meditate, chat with friends, do yoga, be in nature – a list without end.

Who has been the most influential person in your career?

There isn’t a single person, but many – including hundreds of mediators around the world, and thousands of clients who suffered through my mistakes and taught me how to correct them.

What value does mediation add to disputes that you do not find in traditional litigation?

How has mediation changed since your career began? How has that affected your work?

It has become richer, more complex and multi-faceted, with invisible connections to virtually every field of knowledge and human endeavor.  It has become vastly more important as the world’s conflicts and impasses trigger immense suffering and threaten our survival as a species.  It has forced me to think and write about what interest-based approaches to social, economic, political, environmental, and cross-cultural conflicts might look like.

What was the biggest challenge you had to overcome?

My own lack of skill, knowledge of self and others, and willingness (as the title of a book you mentioned put it) to risk “mediating dangerously.”

What advice do you have for mediators that are just beginning their careers? Mediators who are feeling overwhelmed or burnt out?

This is difficult, exacting, and noble work that paradoxically requires us to care for ourselves in order to care for others; work in which it is impossible to succeed without risking failure.  At the same time, it is magical, healing, and sometimes so beautiful it takes your breath away.  When I find myself overwhelmed or exhausted, it is usually because I am stuck at the periphery of a conflict, or because it resonates with unresolved issues inside of me; and I gain energy when I risk approaching its’ well-defended center and open myself for awareness, discovery, invention, humility, vulnerability, other people’s suffering, and life-long learning.  I believe our purpose is only secondarily to resolve or transform conflicts.  Primarily, it is to discover how to do so, a discovery we can only make by failing again and again, until somehow we discover where the key we were searching for lies hidden.  Our success therefore rests on our willingness to fail, and our failure consists of being overly preoccupied with success.  Finally, I highly recommend a daily meditation practice – not only for relieving stress and recovering from burnout, but for expanding your capacity for insight, awareness, and calibrated intuition.

What is your favorite part of your job?

Asking questions, like the ones you’ve asked me, teaching and coaching aspiring mediators, and searching together for the profound and poignant insights that always lead to more advanced skills and methods; freeing people from the suffering that comes from being stuck — not only in their specific conflict, but all similar conflicts.  It is especially exciting in a new, expanding, globally important field like mediation to discover something new, some unique way of thinking about conflict, or responding to it, that releases people from its hypnotic grip.  And as mediation is still in its infancy, we all mediate differently, and every conflict is a little different, everyone can have this experience.

To get in touch with Dr Cloke and for more information, please visit: KenCloke.com