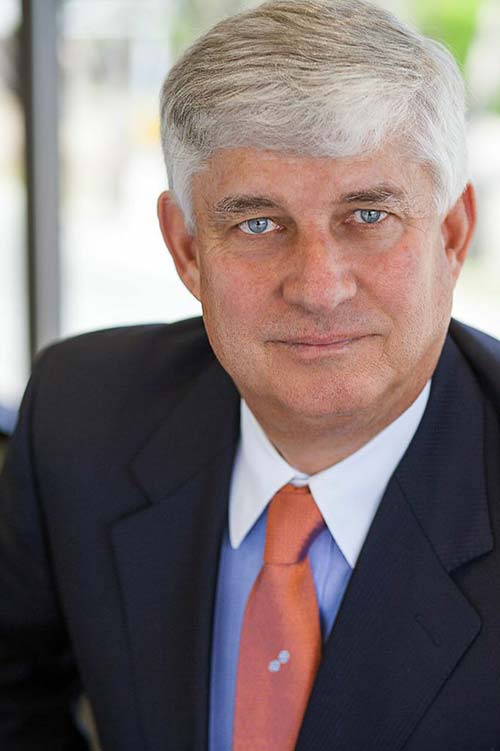 I am encouraged to see more diversity within both the ADR profession, and the parties and counsel who appear before us as mediators. I have worked for several years with two strong female mediators on my team, Michelle Yoshida and Niki Mendoza, and recently welcomed a third, Andra Greene.  I find that diversifying the ADR team allows us to connect with a more expansive range of parties and counsel, and brings additional depth to our team.

Through his extensive time as former United States Attorney, United States District Judge, civil litigator, and ADR neutral over the past several decades, Judge Layn R. Phillips, founder of Phillips ADR Enterprises (PADRE), has developed the reputation as the go-to mediator for the most complex and hard-fought negotiations in the country.

Judge Phillips earned a degree in economics from the University of Tulsa in 1974 and continued directly to the University of Tulsa College of Law.  After graduating from law school in 1977, he joined the Federal Trade Commission’s Honors Program, where he investigated and prosecuted civil antitrust issues at the Bureau of Competition in Washington, DC.  During his time in DC, Judge Phillips completed an LLM in antitrust and economic regulation at Georgetown University Law Center.

In 1980, he made the move to the United States Attorney’s office in Los Angeles, serving as the prosecutor for the Central District of California.  He moved back to Oklahoma four years later and served as a United States Attorney until Ronald Reagan appointed him to the bench as a United States District Judge in Oklahoma City. On the bench, he presided over more than 140 trials in Oklahoma, New Mexico, and Texas.  He also sat by designation on the U.S. Court of Appeals for the Tenth Circuit.

Judge Phillips practices in a wide variety of mediations and arbitrations.  He tends to focus on complex disputes and draws from his extensive time as a judge and litigator to inform his style.  His practice areas include:

Throughout his practice, Judge Phillips has collected an impressive list of high-profile settlements, some highlights of which include resolving:

Over the last decade, mediations under Judge Phillips’s leadership have resulted in several billion dollars in settlements annually.  Achieving this level of success demonstrates Judge Phillip’s ability to resolve even the most difficult of claims.  He has been recognized frequently for his success by various organizations, including being named one of the 10 Outstanding Young Americans by the U.S. Junior Chamber of Commerce and being elected to the American College of Trial Lawyers.  Judge Phillips has also been named one of the “Leading Judges in America” and one of the “Leading Litigation Attorneys in America” by LawDragon Magazine and one of the Top Seven Mediators in the United States by Chambers and Partners.

In addition to a busy career, Judge Phillips has earned the NCAA Missouri Valley Conference Championship while he was at the University of Tulsa.  He was inducted into the University of Tulsa Athletic Hall of Fame for his skill and record in tennis.  He also enjoys traveling, having visited every continent; however, he calls Laguna Beach, California home and shares his life with his wife Kathryn.  He has raised three children and is enjoying being a grandfather to two wonderful grandchildren.

What made you want to become a mediator?

Bottom line, I have always been a problem solver.  I understood my trial experience as a judge and an advocate would help litigants recognize the risks they face from proceeding with litigation as opposed to resolving the matter at a certain juncture.

How would you describe your mediation style?

My mediation style is collaborative, evaluative, and fiercely neutral. I collaborate with my team of experienced mediators, including Clay Cogman, Michelle Yoshida, and Niki Mendoza, who spend numerous hours in advance of each mediation quickly absorbing information about the relevant facts, evidence, law, judge, damages assessments, drivers of settlement positions and any other collateral information helpful to focus the issues and lay the groundwork for an effective mediation process.  This allows us to knowledgeably push the parties to recognize and assess the risks they face with litigation and understand their options for resolving the matter.

What does a mediation typically look like when you are mediating?

Our extensive pre-mediation process allows us to approach each mediation individually, rather than as a one-size-fits-all approach. In general, the baseline process we typically follow involves a pre-mediation process including an exchange of pre-mediation briefing by the parties, pre-mediation calls with my team, and submission and potential exchange of proposed term sheets.  On the day of mediation, we typically begin with an all-hands session in which we go over introductions and ground rules.  Much of the mediation day is typically spent in separate caucus sessions in which the parties are encouraged to candidly discuss with the mediator the claims, defenses, and associated risks.

In my evaluative process, I both assist and challenge the parties in assessing the strength and weaknesses of each side’s case and positions, walk through the likely predicted outcome if the case continues in litigation to trial, and explore and evaluate settlement options and alternatives.  Every matter is unique and so I work with the parties to gather information on other qualitative factors that impact the value of a case, including such matters as business considerations, the presiding judge and his or her track record of rulings and precedent, the jurisdiction where the matter is pending, the strength and credibility of fact and expert witnesses, and whether there is other related pending civil, criminal or regulatory matters.

If a case does not resolve on the first day of a mediation, I employ a process of actively following up with the parties to try to understand what or who created the impasse and look for ways to break the impasse and get the parties back to productive negotiations.  This may involve assisting the parties in identifying and facilitating additional information so they can better assess merits and /or damages. Sometimes what is required is identifying the Secretaries of State from the Secretaries of War to lay the groundwork for the parties’ commitment toward settlement through collaborative relationships. It may be important to explore whether there are other non-monetary terms that can provide additional value to a negotiation.  Or it may be understanding whether one or both parties came to the initial mediation with an unrealistic expectation of what was achievable. Whatever the issue, a strong follow-on process with the parties reflecting on what needs to occur for there to be progress in future negotiations is key towards getting the case back on a path towards resolution.

How has mediation changed since your career began? How has that affected your work?

I am encouraged to see more diversity within both the ADR profession, and the parties and counsel who appear before us as mediators. I have worked for several years with two strong female mediators on my team, Michelle Yoshida and Niki Mendoza, and recently welcomed a third veteran female neutral with whom I worked previously at Irell & Manella, Andra Greene.  I find that diversifying the ADR team allows us to connect with a more expansive range of parties and counsel, and brings additional depth to our team.

What advice do you have for mediators that are just beginning their careers?

Listen and focus on the process. As a mediator, you do not have to know all of the answers all of the time.  If you listen carefully to the parties, you as the mediator may notice miscommunications or a lack of understanding that is hampering the parties’ efforts to reach resolution.  You will also see opportunities to facilitate the exchange of information so that parties may become better understanding about the risks they and their opponents face, such that they can make a more informed decision about whether to proceed with the litigation or resolve it at a given juncture.

Never compromise your credibility, your neutrality or your reputation.

What is your favorite part of your job?

I enjoy sharing with my team and the parties a common commitment to the mediation process. Although not every mediation ends with a settlement – as most of the cases brought to me are highly complex, they rarely settle at the first day of mediation – I strive to help the parties come to a more complete understanding of the hurdles that both they and their opponents face.  For those cases that do not settle on the first day of mediation, I explore sufficient information so that the parties can know what they could have settled for and/or put the matter on a path to settlement in the future.

To get in touch with Judge Phillips and for more information, please visit: Phillips ADR