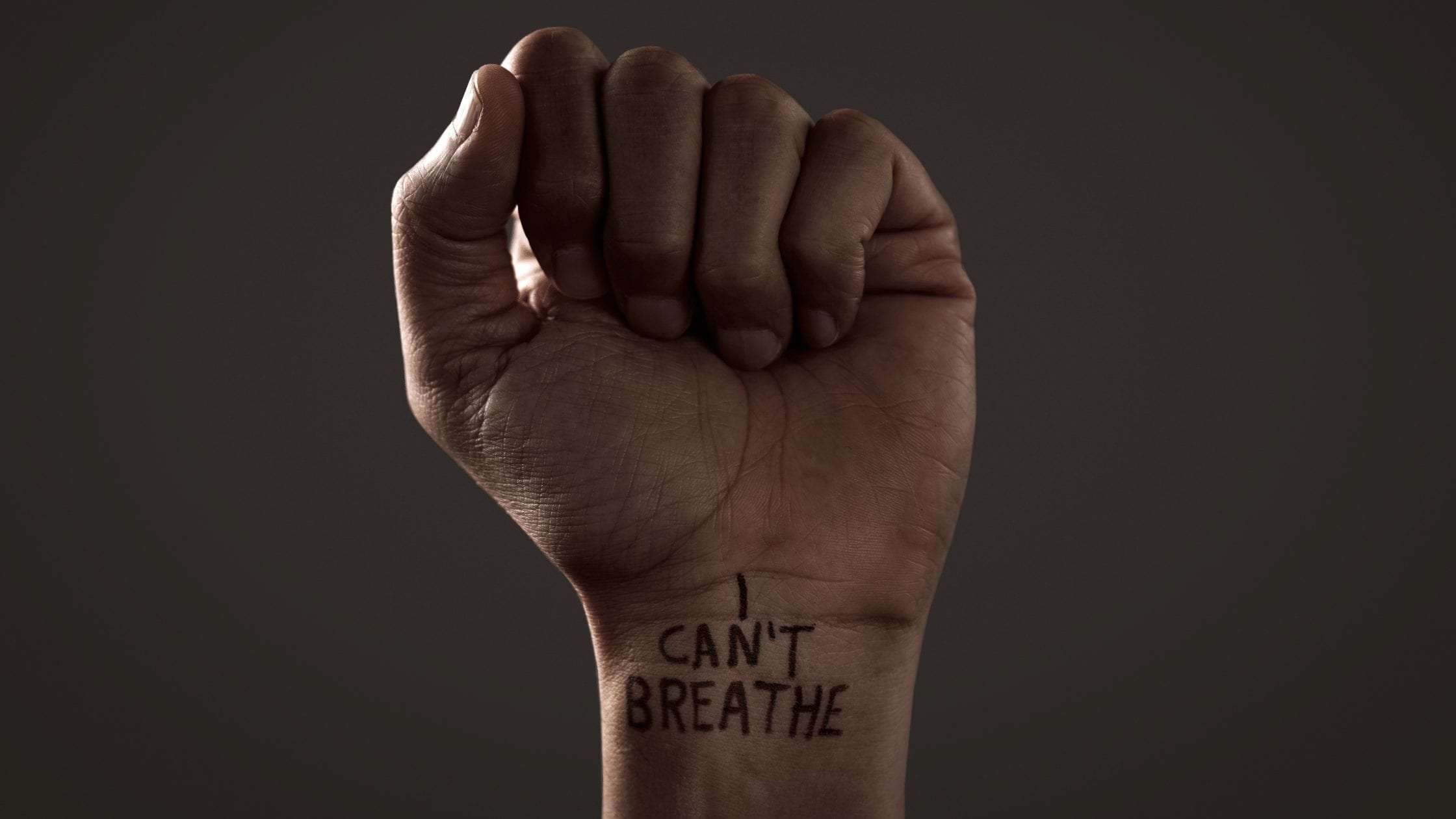 On May 25, 2020, George Floyd, a Black man, laid on the ground under the knee of Derek Chauvin, a white Minneapolis police officer, for what we now know was around nine minutes.  In a video that almost everyone around the world would see in the following days. Chauvin brushed off the concerns of bystanders urging the officer to aid Floyd as Floyd struggles to breathe, yells for his mother, and eventually loses consciousness.  Minneapolis became the epicenter of a movement to address racism, hate, and centuries-long injustices that Black people experience in America.  Floyd’s death sparked worldwide protests and uprisings lamenting the violence Black men and women face at the hands of law enforcement officers and calling for changes to the way America polices.

And nearly a year later, the man seen in the video kneeling on Floyd for nine minutes and twenty-nine seconds is on trial in Minneapolis, a trial the nation and the world are watching.  A trial that was in the midst of jury selection when the city finalized the largest pretrial settlement paid out to a family of a Black man killed by police.  The settlement, while historic and helps to give Floyd’s family some semblance of restoration, does not feel like the full weight of justice.  The current trial provides an opportunity for the state to hold officers accountable when they use unnecessary and prolonged violence toward people in their custody.   Over the next few weeks, people will be watching and reliving the horrific events that unfolded last May as George Floyd died, and the family of George Floyd, the city, the nation, and the world will be asking for justice to be passed along.

It is also important to note that Floyd’s death was the third in a string of Black men and women killed in a way that the public was talking about.  On February 23, 2020, Ahmaud Arbery was shot by white men chasing him down as he ran outside through a neighborhood.  The men who killed him are currently in the midst of their trial.  Then, on March 13, 2020, Breonna Taylor was killed in the night when police opened fire while executing a warrant that mistakenly listed her address as the premises to be searched. The officers were put before a grand jury that declined to prosecute them; however, critics argue that the prosecuting attorney purposefully made it impossible for the jury to hold the officers accountable.  Regardless, the nation was already dealing with the deaths of Arbery and Taylor when Floyd was publicly killed in Minneapolis on May 25, 2020, sparking outrage and uprising that challenged the idea that America was past racism and forced the nation to confront the racism that has been present since the founding of America.

This article will look at the settlement the city of Minneapolis and the family of George Floyd reached.  It will also take a look at the Derek Chauvin trial so far and what the prosecution and defense seem to be using for their arguments. It will also be updated periodically as the trial continues.   However, first, it will look briefly at the city where George Floyd died, where the trial is taking place, and which recently voted to settle the lawsuit with Floyd’s family.

A Brief Intro to Minneapolis

To understand some of the dynamics of the settlement and trial, it is important to understand a little about the city of Minneapolis, the most populous city in Minnesota.  Minneapolis, together with Saint Paul, its sister city across the Mississippi River and the state’s capital, make up what Minnesotans refer to as the Twin Cities.  The Twin Cities are the metropolitan hub of Minnesota, containing much of the state’s art, music, government, and culture.  Many Minnesotans are of white Scandinavian or German descent, with a variety of other people primarily northern European nations.  However, Minnesota, and especially Minneapolis, has been a hub for refugees from Karen, Hmong, and Somali backgrounds.  Additionally, Minneapolis is the most diverse city in Minnesota and has a large BIPOC population that has continued to grow.

However, Minneapolis is also one of the most segregated “liberal” cities in the country. Minneapolis has a long history of redlining—racial covenants that bar Black people from purchasing homes in certain areas and forcing lenders to not approve mortgages.  This has driven Black people in Minneapolis to the areas that were not redlined and created predominantly Black neighborhoods.  Additionally, these areas of Minneapolis are over-policed and suffer from the effects of being pushed aside by the greater Minneapolis population.

To add yet another ingredient to the pressure cooker of a racial reckoning brewing in Minneapolis, the police in Minneapolis tend to use force against Black people at a rate of 7 times more than they use force against white people, according to data analyzed by the New York Times.  The city has had thousands of reports of force in the last few years, and 206 people have died after a confrontation with police in Minnesota since 2000, according to the Star Tribune.  The city has been discussing the issue of force and deadly force since before Floyd died, but the murder of George Floyd at the hands of police has put the Minneapolis Police Department and their policies and actions in front of the nation as a district where force needs to be addressed.

As Minneapolis has become the backdrop of the trial, the city has fought to create city policy that follows the view that many white people in the city have felt as the reality for some time, that Minneapolis is a liberal and welcoming city for all.  However, the circumstances surrounding Floyd’s death and the resulting policy changes and research has demonstrated that this view is just wishful thinking and not the current reality.  The city has introduced reforms for the use of force and policing in Minneapolis, but many have called for a reduction or elimination of the police department as it currently is.  The trial and the settlement will examine and put these policies and practices on display.

The settlement allows Black people around the country to have hope that they may see justice to some degree because it encourages accountability and honesty from the cities that allow police officers to use excessive force against Black people.  It also allowed the family of George Floyd to receive some payment for the improper and inexcusable way in which they lost Floyd without having to relive and rehash the events of the day and the pain of missing Floyd in court.  It also provided $500,000 for the area around Cup Foods on 38th and Chicago, the intersection where Floyd took his last breaths, with the hope of rebuilding the community impacted by the uprisings last summer.

Some people are criticizing the settlement, however, because it was announced right in the middle of jury selection for the Chauvin trial in Minneapolis.  Chauvin’s lawyer indicated that it could cloud the way the jury felt about his culpability based on the willingness of the city to pay Floyd’s family.  The judge in the criminal trial stated that it was unfortunate timing, but remained convinced that the jury could be selected and that the trial would remain fair.

The Trial of Derek Chauvin

The trial of former Minneapolis police officer Derek Chauvin officially started on March 29th, 2021 after weeks of jury selection.  The prosecution, led by Matthew Frank, Erin Eldridge, Jerry Blackwell, and Steven Schleicher, presented an opening statement first through lawyer Jerry Blackwell.  The prosecution focused on the video evidence and reminded the jury that the full length of the video includes Chauvin choosing to continue kneeling on Floyd’s neck despite Floyd’s and the crowd’s pleas to help him and stop the restraint.  Mr. Blackwell argued that the force used was excessive and unnecessary and that Derek Chauvin murdered George Floyd.  He also argued that Chauvin’s actions were not a split-second decision, but a drawn-out, continued decision to keep pressure on a man’s neck to restrain him.

Chauvin’s defense lawyer, Eric Nelson, presented his opening statement next, stating that Chauvin’s actions were not the cause of Floyd’s death.  Mr. Nelson argued that it was Floyd’s health conditions and drug use that contributed to and caused his death.  He argued that there is another side to the story in the death of George Floyd and that there is serious doubt as to the cause of Floyd’s death.

These statements outlined the view of the case for both teams.

Prosecution: The prosecution is focusing on the use of force and its excessiveness that killed Floyd.  The video of Floyd’s death that went viral is a central part of the prosecution’s case, and it lands in the prosecution’s favor.  However, the prosecution has to convince all twelve jurors that will vote that there is no reasonable doubt that Chauvin killed Floyd through his actions.  This standard is notoriously hard to achieve, even with evidence as damning as a video of a police officer kneeling on a man’s neck until he stops breathing.

Defense: The defense has the job of casting doubt in the jury’s mind about the cause of Floyd’s death and the intentions of Chauvin.  The key piece of evidence in the defense’s case is the medical examiner’s report that mentioned heart failure and drugs.  The defense is arguing that it was Floyd’s drug use combined with his health problems, that cause his death.  However, the defense has to overcome the video that will be shown to the jury many times throughout the trial.

After the opening statements, the prosecution team has begun to present their case, calling a variety of witnesses to testify about what they saw on the day Floyd died or their opinions about the force used during the arrest.  Eyewitnesses testified to feeling helpless because they could not intervene and provide care.  Courtney Ross, Floyd’s girlfriend, testified to the details of their relationship and their battle with drug use—a testimony that the prosecution intended to use to show that there were not enough drugs in his system to kill him based on his prior use.  Multiple police officers testified about the force used by Chauvin, stating that the tactic used was not a restraint used by the Minneapolis Police Department and that Chauvin’s behavior was an unnecessary and excessive use of force.

As the trial continues, the prosecution will continue to present evidence that Chauvin knew that the force used was unnecessary and excessive and that he chose to continue using this force. The defense will present their case that Chauvin did not cause Floyd’s death.  And as these cases are presented, the world will continue to watch and see if George Floyd and the Black men and women killed by police will be given justice.