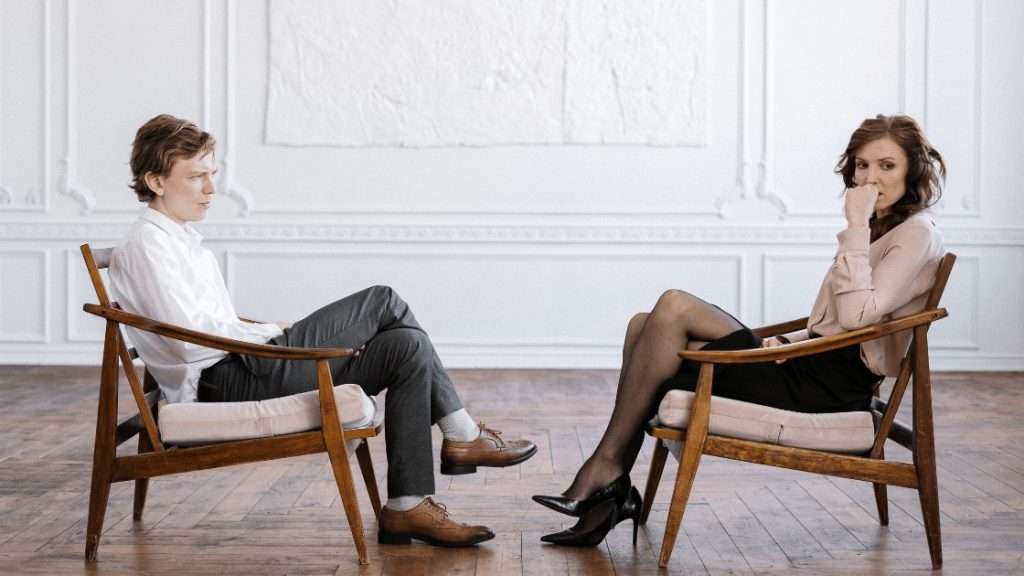 This is just not Joe’s week.  His wife Janice is out of state with the kids on a trip to visit her parents.  He stayed behind to catch up at work.  Somehow, that had been the wrong choice.  It led to a huge argument before they left.  Everything led to an argument these days.

Now, the doctor said Joe has COVID-19 despite being vaccinated and has to quarantine. At least he can work remotely.  He calls Janice to tell her the news. Instead of sympathizing, she makes a wisecrack about Joe having gotten the virus from a girlfriend. That isn’t true and she should know it. The conversation quickly becomes yet another argument, this time so severe that the word “divorce” is used by both of them.  Finally, Joe hangs up, exhausted.  But he and Janice are both convinced that divorce is inevitable.

Joe is worried that Janice will simply stay with her parents and file for divorce out of state, which would mean extra travel and expense for him.  He could file for divorce first, but can’t really afford a lawyer now. Anyway, he shouldn’t be running around town to lawyers and courthouses while he is supposed to be quarantined.

Joe does not want the divorce process to turn into an all-out war. He knows divorced couples who miss important events in their children’s lives because they cannot be in the same room long after their divorce.  Strife like that would be bad for the kids, and difficult to deal with in the long term. Also, fighting over everything could be ruinously expensive for the parties. Losing Janice’s income will be hard enough. There’s no point giving everything else to the lawyers.  If only there were a non-confrontational way to resolve the issues in the divorce while Joe is quarantined and Janice is out of state…

Is online communication an effective medium for dispute resolution in divorce cases?

A contested divorce is indeed expensive. Its cost will vary depending on the complexity of the custody issues, the extent and character of the property involved, the litigiousness of the parties, and the cost of legal services in the community.  Top firms in urban areas can change over $1,000 per hour. Of course, most charge much less. On average, divorce costs each party $15,000 to $20,000.  The financial consequences are magnified by the expense of maintaining separate households. About 20 percent of bankruptcies flow from divorce.

The impact on children of parents who are unable to peacefully coexist can seriously affect a child is serious.  Children without both parents in their lives suffer a range of academic and behavioral problems. In addition, because there is no communication, parenting is inconsistent between households, leading to confusion, conflict, frustration, and resentment.

Putting the issues of the pandemic and Janice’s presence out of state aside for a moment, the obvious answer to Joe’s concern over reducing cost and minimizing conflict in his upcoming divorce is for the parties to engage in divorce mediation. While private mediators may charge as much as attorneys, the process generally requires only one to four sessions to complete, and leads to resolution between eighty and eighty-five percent of the time, meaning that it is much less costly and time-consuming than litigation, which often takes years.

Ordinarily, mediation takes place face to face in an office. But in a pandemic, things must be done differently, to allow for social distancing and other safety measures.  Like other business meetings, mediation can be done virtually.  This solution also eliminates the time and expense of out-of-state travel.  Before seizing on this solution as a universal answer, we should ask about the advantages and disadvantages of ODR generally and in the divorce mediation context.

Despite the fact that the realities of the pandemic have put online dispute resolution and other remote work options newly under the spotlight, it is not a new phenomenon. ODR has existed for at least a decade. It began with commercial websites like eBay.

The term online dispute resolution is somewhat misleading.  It includes negotiation and mediation using any form of technology, including telephone, email, instant messaging, and teleconference platforms.  Unless specified, this article concerns teleconferencing.

Sixty-six courts in twelve states use ODR in court-annexed dispute resolution programs, according to a recent survey by the American Bar Association. But only five of them use ODR in dissolutions, according to the ABA.

Online dispute resolution of all kinds has a number of advantages over its in-person counterpart:

As the American Bar Association points out in a report about online dispute resolution, the use of the process requires several things we often take for granted:

On first impression, the ABA’s concerns seem largely misplaced. As a society, we seem awash in electronic devices with the necessary capabilities and eternally connected to the internet.  But as the Bar points out, the reality is much different for those in lower economic strata. Surprisingly, almost 17 percent of the U.S.  population has no internet connection.  Among those with incomes under $75,000, the number rises to 37 percent.

Eighteen percent of the population has no computer or only a smartphone (which may not support an ODR program). About 12% of the adult population lacks a high school diploma, and about the same proportion is disabled (though the likelihood of disability rises significantly with age).  Each of these groups (the disabled, non-English speakers, and those without a high school diploma) is significantly over-represented among those making less than $75,000 and likely to lack an internet connection.  Ironically, these are the same people who would benefit from ODR the most.

The lessons to be drawn from the ABA research are that the basic requirements for participation in ODR may not be taken for granted and that the poorer segments of society may be unable to benefit from ODR without assistance.

Beginning with studies of email, online communications have been found to be blunter and harsher than in person.  People feel less constrained to conform to social rules when they are not physically present Which leads to misunderstandings and sometimes impasses.

Researchers at The Wharton School identify a phenomenon known as emotional contagion, by which a strong emotion experienced by one person is also experienced by others in the room. The phenomenon can be used to affect the emotions of negotiators and increase or decrease the likelihood of an agreement Dr. Sigrid Barsade explains emotional contagion this way: “I see a smiling happy person, which leads to my automatic subconscious mimicry of her smile, leading to a self-perception and feeling of happiness, which leads to my actually feeling happy…[W]e usually think of emotion as originating only from the inside out: I feel happy, so I show this by smiling outwardly. Emotional contagion shows that emotions can also be produced from the outside in: When you see someone smile, it makes you smile and then makes you happy.

Emotional contagion has also been shown to occur at a conscious level through social comparison processes in which people look around and compare their affective moods to those of others in their environment and then respond accordingly.”

Studies of online dispute resolution indicate that emotional contagion has less effect in that context than in face-to-face negotiations.

A third social phenomenon is an improvement in overall outcomes when negotiators are in close physical proximity. Experimenters suggest this result flows from the greater opportunity for negotiators to interact when in proximity— in the restrooms, getting coffee, in hallways, and so on.  Continued interaction is beneficial whether it concerns the issues under consideration or not. Informal talk about unrelated topics—what researchers call schmoozing—builds rapport and fosters understanding.  Users of ODR lack these opportunities for understanding.

Research has not yet quantified the impact on the effectiveness of online mediation. What data there is showed that online dispute resolution Is successful about 75% of the time. While this is not as effective as in-person mediation, it still is a worthwhile tool to end the conflict.

Is divorce mediation ever inappropriate?

Because of the divorce mediation’s many advantages in saving time, money, reducing conflict, and maintaining confidentiality, it should be tried in most cases, although parties should use attorneys and other professionals whenever the complexity of the case warrants it, despite the common assertion by some family mediators that attorneys are unnecessary.

There are a few isolated situations in which mediation is Inappropriate, however.

The first is where there is a history of domestic violence.  Such treatment can leave the victim with little confidence and low self-esteem, blaming themselves needlessly, timid and fearful of reprisals, and deferring to the abuser to avoid the consequences of their actions.  Such a victim cannot reasonably be expected to pursue their interests in mediation, giving the abuser an unfair advantage.

A second inappropriate scenario for mediation is when the party suffers from mental illness or addiction issues so that he or she may not be able to bring full cognitive capacity to bear during the mediation. This too would give an unfair advantage to the other party, precluding mediation.