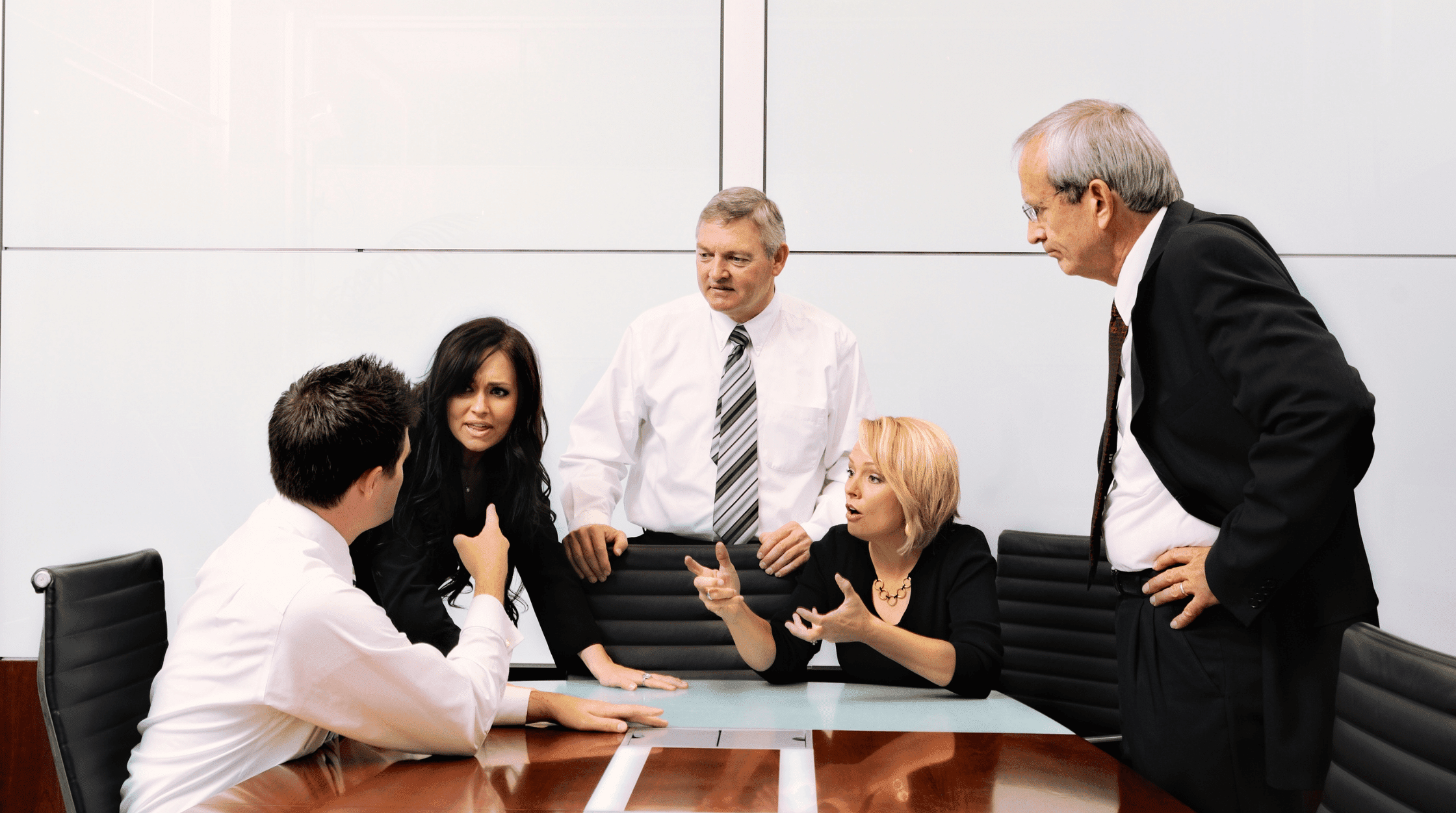 Simply put, workplace conflict is the conflict that happens among coworkers at work.  Conflict is a dispute that is not easily solved and addressed.  Rather than a short disagreement, a conflict will often last hours, days, weeks, or months.  Conflict is often the result of an unresolved dispute, and it becomes particularly harmful when it is focused on the people involved rather than the issue. Conflict can involve anywhere from two coworkers to everyone at the company choosing aside. However, conflict is unavoidable and will occur in the best workplaces, but workplaces will need to learn how to handle and avoid long-term conflict to ensure the workplace is a safe and productive space.

Effects of Conflict on the Workplace

Important to understanding the danger of unresolved workplace conflict are the results of such conflict.  When coworkers, managers, or teams are unable to work well together, the culture of the workplace will shift.  As the conflict remain unresolved, it will result in issues that the company could face for years down the road.  Some examples of these issues are:

Because conflict can negatively affect the workplace, many companies are seeking to create strategies for resolving conflict.  One of the most important steps involving conflicts is to identify the source and type of conflict to ensure that the root cause is addressed.  While there are a variety of types and causes of workplace conflict, this article will discuss six common causes.  These types of conflict are leadership, personality-based, creative idea, discrimination, culture, and task-based.  Each of these types of conflict will have the effects listed above and will affect a variety of people, even those not directly involved in the conflict.

In discussing each of these types, there will be an example included.  The example will be based on these facts:

Leadership requires both a leadership style and a follower style.  Every leader will have a way that they lead their team, and every person on that team will have a style that they respond to leaders with.  Occasionally, these styles clash and can cause conflict on teams.  This is especially true when there are multiple leadership styles on the same team and the team members are having to respond differently to each one.  These types of conflict are most common when there is new leadership on a team and the team has to respond to their style and learn to work underneath them.  It is also common when teams with different leadership styles need to work together to accomplish a project.  These types of conflict are often solved with clear goals and values that the team can follow, even with shifting leadership.

One week, Dwight leaves for vacation, and Molly is put in charge of keeping the development team on task.  Molly sees that Darcy is behind on a project and pushes her to finish it before the end of the week, even though Darcy tells her Dwight wanted her to spend as much time as needed, as this was a special design.  When Dwight returns, he tells Darcy that her work looks forced and asks her to redo it, taking as much time as the creative process requires.  Darcy feels confused after the back and forth, and asks that Dwight set clear instructions next time he is away.

Everyone has their personality, and occasionally certain personalities do not get along.  This is common when team members misinterpret or misunderstand the attitudes of other teammates.  Leadership conflict is a subtype of personality-based conflict, but it does not depend on a person’s position in the company.  This type of conflict is especially prevalent when team members are working together on a project and these misconceptions are at the forefront.  Personality-based conflict leads to resentment and misunderstanding.  These types of conflicts are often best handled by acknowledging the conflict and having a conversation about the misconceptions that the coworkers have with one another.

Consider the facts above.  Mason believes Morgan tries too hard to impress Molly.  Morgan thinks that Mason is lazy because he only does what is asked of him.  Molly assigns an important advertiser to Mason and Morgan and asks them to pitch a new line.  Morgan gets frustrated because Mason prepares the presentation and researches the advertiser, but only scratches the surface.  She does not know that Mason is working two jobs to keep on top of his bills after his wife had twins.  Mason gets frustrated because Morgan asks him for more, and he does not have time for more. He doesn’t know that Morgan is overcompensating because she was fired from her last job and is terrified it will happen again.  One day, the two have a heart-to-heart about their fears and needs, and Molly agrees to help Mason however she can, and Mason agrees to budget his time better while he is at this job.

When employees are brainstorming and coming up with ideas for a new project, there will be many different ideas and plans for how the project will go.  Often, this will result in many of the team members feeling like their good ideas were overlooked or swept aside, which can cause the team members to act out.  This type of conflict can be one of the more productive conflicts because it can encourage the parties to consider new and different ideas and work together to create something even better than the initial idea.  However, it can also be destructive if the team members are not able to see the ways that their ideas work together and one or both parties feels overwhelmed or undervalued.

In this example, Danica and Darcy are working on a design for a pillowcase for a new line.  Danica believes that a pattern on the pillowcases would set the bedding apart.  Darcy believes that button closures on the pillowcases would give them a new flare.  The two argue about the best way to design until they come up with a subtle pattern that includes the button closure to finish the look.  If they had handled it poorly, they would have had two pillowcase designs to represent.

Conflict in the workplace that involves discrimination is a serious kind of workplace conflict and should be dealt with swiftly and effectively.  Discrimination is the unproportionate treatment of a person based on their age, race, ethnicity, gender, sexual orientation, or nation of origin.  Human resources and civil rights attorneys may be involved in the dispute very early on.  Understanding and recognizing discrimination is an important step in protecting employees from its effects.  Companies will need to have a plan in place to halt discrimination.

Before Dwight took over the development team, there was a manager named Diane.  Diane did not like Danica because she is Black.  Diane would regularly try and make Darcy the leader in the development team and made a habit out of choosing Darcy’s work over Danica, even when Darcy would say that she thought Danica’s was better.  After some time dealing with Diane, Danica went to the supervisor and informed her of Diane’s behavior.  Diane was investigated and let go due to her discriminatory behavior.

Cultural conflict is a clash between coworkers from different backgrounds. This is particularly prevalent in diverse, multigenerational teams.  While these teams are the goal of creating a healthy and inclusive space, there are often growing pains and awkward conversations as a team learn to adapt to other experiences and ways of doing things.  These differences can help coworkers grow and expand their skill sets, but the conflict that arises must be dealt with before anyone is discriminated against or feels unwelcome.  This type of conflict is best addressed by encouraging coworkers to learn from one another and be open to new ideas.

For example, Molly started her career at a time when marketing was dominated by men.  She had to tough it out with “all the boys” to make it to where she is today.  When she started, a coworker would make comments about her being emotional all the time until she forced herself to mask emotion.  One day, after a particularly hard week, Morgan expressed her frustration and sadness with Molly.  Molly told her that she needed to learn how to handle her emotions and not let them get the best of her.  Morgan responded by telling Molly that her emotions are good and are what drive her to be successful.  Molly listens to Morgan’s advice and begins to see how emotions are a motivating force for her.

Task-based conflict is the result of a conflict in the ways that coworkers believe things should be done.  This can disagreements about deadlines to conflict because someone shows up late to staff meetings regularly.  This is most obvious when one team or coworker is relying on another to be able to start a project and they cannot because the first task is not finished.  When one team misses a deadline, it can cause resentment from the team that was affected.  This type of conflict is best addressed by delegating tasks and scheduling reasonable deadlines.

To illustrate this type of conflict, imagine Dream Corp is looking to develop a new line of sheets for a partnership with a local mattress company.  Dwight is put in charge of development and Molly’s team is put in charge of marketing the campaign.  After the initial deadline for the design had passed, Molly becomes frustrated that Dwight’s team has not finished the designs so she can start creating her campaign.  Dwight is angry at Molly because he feels like the pressure from Molly is interfering with his team’s creative process.  Dwight’s team is stuck between their process and Molly’s deadlines.  Finally, Molly and Dwight agree on a schedule that better accommodates the creative process.

Workplace conflict is a fact of life, but it does not need to have the effect that it could have on the employees and the company.  This can be accomplished by creating a plan for identifying and dealing with conflict that leaves all the members of the workforce feeling accepted, seen, and included.  Identifying what type of conflict is at play can help direct the plan when a company responds.  However, the most important tip for managing workplace conflict is to follow through when committing to a plan.  When the employees know that their conflicts will be dealt with and how they will be dealt with, they will be more receptive to the process, and conflicts will be resolved almost before they begin.